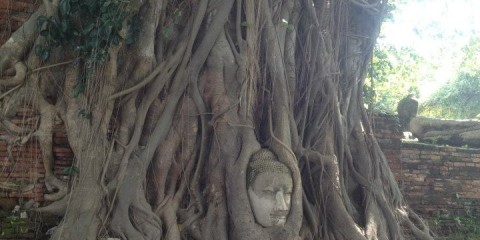 “Now is the time for adventure”

Our tour guide said, “Follow me… Don’t be afraid. Now is the time for adventure!”

And we did follow her, across the muddy grass, and some of us even swallowed our fears of heights as we ascended narrow staircases to the tops of ancient temples.

That was just the start of our journey.

It was October, which is monsoon season in Thailand. We saw plenty of hot, humid days with the sun beating down on us in between heavy rain storms. As a woman, I had to wear clothing that covered my shoulders (and sometimes, also covering my elbows and ankles) despite the heat. Needless to say, generous amounts of sweat were covering what felt like every square inch of my body. My face is red and my hair is messy in all my photos, and tiny beads of sweat are glistening in the Thai sun in a few of the pictures from this trip. 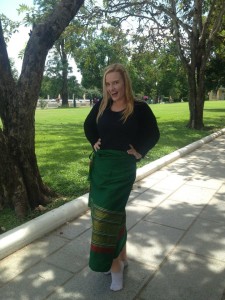 Women were required to rent skirts before entering the temple

As another batch of storm clouds gathered overhead, we ducked into the dark interior of the top of a cone-shaped structure in the Ayutthaya ruins. And this was the point in the journey when I truly began to channel my inner Indiana Jones. No, wait.. I live in Louisville. Perhaps it was Kentuckiana Jones instead? Anyway, I digress…

Our amazing tour guide, Tajma, invited us to descend the narrow steps leading down to the depths of the ancient tomb where we were hiding from the rain. Not knowing what might be in store, but feeling ready for an adventure, we agreed to give it a try. Rafael is always up for adventure, so he went forward into the darkness with a “Hell yes!” attitude. Me? I’m a little more cautious. With a shrug, I approached the steps, thinking to myself: “When in Thailand…”

I remember seeing the tiny stairs just going down, down, down into the earth with no end in sight. The ancient stairs were so dark and narrow, I had to use my hands to grip them as I baby-stepped my way down, almost on my belly, clinging to the stairs for support. As I carefully climbed down for what felt like an eternity, I reached the claustrophobic chamber at the bottom.

There was a tiny tomb, probably meant for an ancient king, but it was dark and cramped, with a musky smell. There were etchings on the walls, and dirt was everywhere. Even the palms of my hands were covered — and the tiny stairs had sweaty palm prints from where we had guided ourselves down. Only a couple people could fit into the chamber at a time, so after snapping a few pictures, we carefully turned around and started crawling our way back up the stairs — one hand and foot at a time. 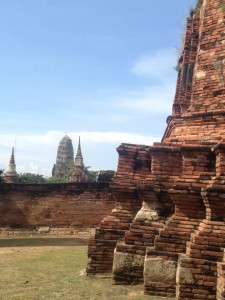 Exploring the excavated ruins of Ayutthaya

I’m very grateful to have taken this tour with Tajma, as I never would have had the chance to experience Ayutthaya (or many other aspects of our Thailand journey) without the experienced guidance of a local. A little background information about Ayutthaya:

Founded in 1350, Ayutthaya is located in the valley of the Chao Phraya River. It is known as Ayutthaya Kingdom or Siam, and was the second Siamese capital. It was once a splendid city with wondrous towers and monasteries, but it was destroyed by the Burmese army in the 1700s. Ruins are still being excavated and many of the statues we saw were beheaded by the Burmese army which conquered the city and led to the fall of the kingdom. Today, Ayutthaya is a UNESCO World Heritage site. 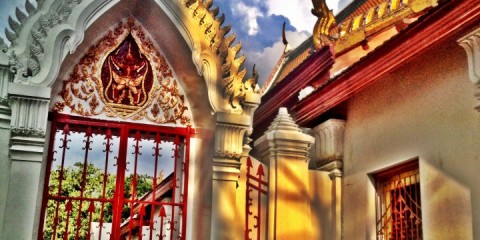 Who knew one of the most exciting moments of my life would have a soundtrack of “We Wish You a Merry Christmas” sung in September beneath the hot Thai sun? Yet there I was, riding on the back of an elephant as it crossed a river in the lush Thailand rainforest. And Rafael was smiling beside me as the elephant trainer serenaded us in broken English.

At this point in our journey, we’d already toured the bustling streets of Bangkok, played Indiana Jones in the ancient ruins of Ayutthaya, stayed in a real life jungle hut, held giant snakes, met monks, had our breath taken away by Buddhist temples, and even taken a boat ride through a famous floating market. All of those moments felt eternal as they happened. They all left us feeling speechless and inspired with awe, and yet this one somehow stole the show.

We captured our entire elephant ride on video here

“Very good, right?” the elephant trainer asked us with a smile. And it was. Everything about Thailand was indeed so very, very good. 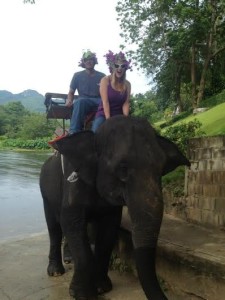 Rafael and Brittany riding an elephant (look, ma, no seatbelt!) 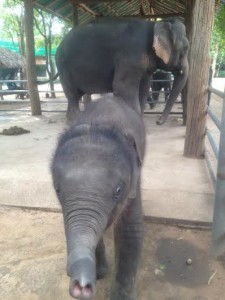 I’m so glad I took a chance on that elephant, on Thailand, and on our travel company, Friendly Planet. I will never, ever forget these moments. Rafael and I still travel the world together and we’ve stayed in touch with the friends we met during our Friendly Planet tour.

Every time we hear the song “We Wish You a Merry Christmas” you know what we think of? Christmas. But we also think of elephants. And a jungle. And a river… 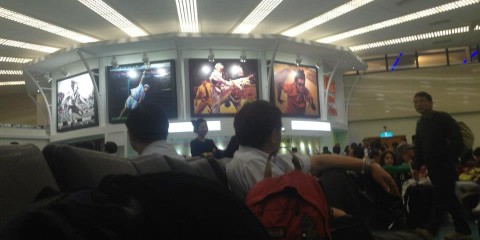 We spent a layover in Taiwan (Republic of China) when traveling to and from Southeast Asia in 2012. Would love to go back for a “real” trip sometime… 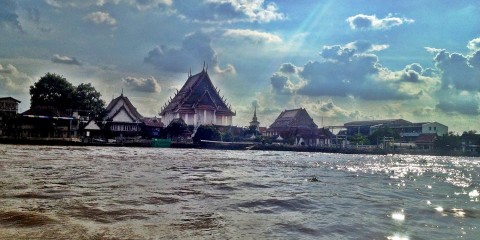 Why was Thailand one of our favorite adventures ever? Well, I think these highlights pretty much sum it up:

1. Buddhist temples. And Buddhist monks. And lots of them. Everywhere.
2. The people really ARE the friendliest and happiest we’ve ever seen
3. We rode an elephant. Through a river. In a rainforest. While being serenaded by a local who couldn’t speak English. Don’t believe us? Watch the video…